Suit Drive Held in Partnership with the Metropolitan Black Bar Association,
“100 Suits for 100 Men” and others

Acting Brooklyn District Attorney Eric Gonzalez today joined Mrs. Lu-Shawn Thompson—widow of District Attorney Ken Thompson—as she donated 20 of the late District Attorney’s suits, as well as dress shirts, shoes and ties in support of the “Suited for Success” men’s suit drive spearheaded by the Metropolitan Black Bar Association. The clothing will assist men recently released from the Rikers Island Prison Complex as they search for and secure employment.

Acting District Attorney Gonzalez said, “The late District Attorney Ken Thompson firmly believed in fairness and second chances. With today’s generous donation of his personal professional wardrobe, DA Thompson’s legacy continues on and ex-offenders are given an opportunity to present their best self as they seek gainful employment.”

Mrs. Thompson said, “My husband, the late and great Ken Thompson, would be happy to know that 20 of his suits and related clothing have been passed on to individuals seeking a better life. It is my hope and prayer that this clothing helps someone land their first significant job, obtain independence, or even improve their self-esteem. The legacy of my husband will live on through the men who will ultimately adorn his clothes and make their own marks on the world.”

Paula Edgar, Metropolitan Black Bar Association president said, “The Metropolitan Black Bar Association, as New York City’s largest black bar association, is committed to giving back to our community and advancing justice.  Our collaboration with “100 Suits for 100 Men” is a continuation of our #MBBA Gives initiative, designed to connect our members and supporters to volunteer opportunities and options for giving back.  We are grateful for collaborations with public officials in each borough to provide suits for formerly incarcerated men.  Having access to business clothing is one step towards helping these men return home prepared to look for and obtain work.  Special thanks to Lu-Shawn Thompson for her generous donation of the late Brooklyn DA Kenneth Thompson’s suits to this effort.”

The Brooklyn District Attorney’s Office partnered with the Metropolitan Black Bar Association, “100 Suits for 100 Men”, the NAACP-Mid Manhattan Branch Criminal Justice Committee and other community leaders and organizations to host the “Suited for Success” drive. The clothing drive began January 17, 2017 and will end on February 10, 2017. To date, the Office has collected 65 men’s suits and over 200 other apparel items.

The donated items will be delivered to “100 Suits for 100 Men”, a not-for-profit organization committed to reducing prison recidivism by assisting ex-offenders in finding employment and securing jobs.
For those interested in donating to the suit drive, the Brooklyn District Attorney’s Office is accepting final suit donations on Friday, February 10, 2017 at 350 Jay Street, Brooklyn. Donations may be left in the lobby between the hours of 10a.m. and 2p.m. All other times contact: communityaffairs@brooklynda.org 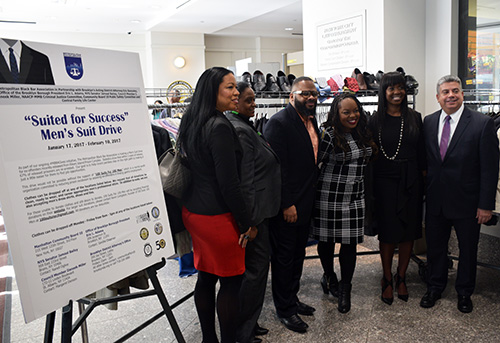