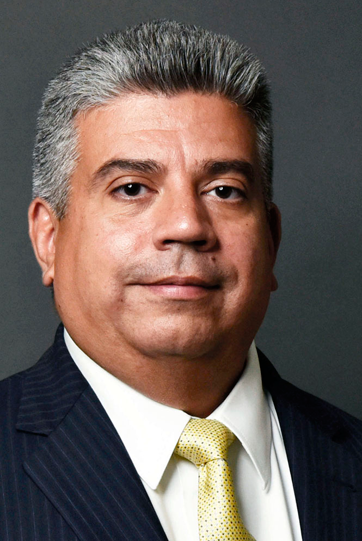 Eric Gonzalez made history in November 2017 when he became the first Latino District Attorney elected in New York State. He had been appointed Acting District Attorney by Governor Andrew Cuomo a year earlier following the tragic death of his predecessor, the late Ken Thompson, for whom Gonzalez had served as Chief Assistant District Attorney.

DA Gonzalez began his legal career in the Brooklyn District Attorney’s Office upon his graduation from law school in 1995 and spent several years as a junior and then senior assistant in various bureaus within the office, including the Sex Crimes and Special Victims Bureau, Domestic Violence Bureau, Orange Zone Trial Bureau, and Green Zone Trial Bureau, where he was promoted to Chief. During his career Gonzalez tried a full range of cases, including homicides.

Promoted by District Attorney Thompson in March of 2014, DA Gonzalez was instrumental in the office’s smooth transition during the change of administrations. Gonzalez successfully guided the launch of several key initiatives, including the creation of the office’s nationally-recognized Conviction Review Unit and the office policy of declining to prosecute the possession of marijuana, which he framed and implemented.

Since his appointment to lead the office, DA Gonzalez has implemented his own trailblazing initiatives, including bail reform, a Young Adult Court, expansion of non-prosecution of marijuana possession, a pre-court diversion program for low-level drug offenders and a policy to reduce unfair immigration consequences in criminal cases.

Following his swearing in as District Attorney in January, Gonzalez launched a ground-breaking initiative known as Justice 2020, to help him carry out his vision of keeping Brooklyn safe and strengthening trust in our justice system by ensuring fairness and equal justice for all. Justice 2020 consists of a 17-point action plan – created by a committee of criminal justice reform experts, defense groups, service providers, law enforcement, formerly incarcerated individuals, clergy and community leaders – to make the Brooklyn District Attorney’s office a national model of what a progressive prosecutor’s office can be. This blueprint will transform the work of Gonzalez’s office by shifting toward preventative and accountability solutions with a track record of success, and away from over-reliance on criminal convictions and incarceration

DA Gonzalez grew up in East New York and Williamsburg, Brooklyn, and attended John Dewey High School in Coney Island. He graduated from Cornell University in 1992 with a Bachelor of Arts degree with a dual major in government and history. In 1995, he received his Juris Doctorate from the University of Michigan Law School, where he was president of the Latino Law Students Association.

He resides in Brooklyn, less than a mile from where he grew up, with his wife and three boys.