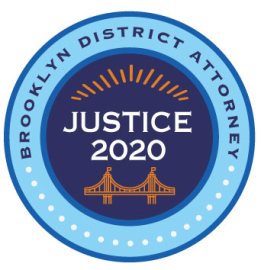 Brooklyn District Attorney Eric Gonzalez today announced a groundbreaking initiative aimed at keeping Brooklyn safe and strengthening community trust in the criminal justice system by ensuring fairness and equal justice for all. Justice 2020 will rely initially on a Launch Committee consisting of criminal justice reform experts, defense groups, service providers, law enforcement, formerly incarcerated individuals, clergy and community leaders. The committee – co-chaired by Medgar Evers College President Rudy Crew and former New York Chief Judge and currently of Counsel at Latham & Watkins LLP Jonathan Lippman – will meet in subcommittees that will present recommendations to the DA in the spring. These recommendations will be integrated into a plan that will be shared with the public as a set of goals aimed at achieving this vision of reform by the year 2020.

District Attorney Gonzalez said, “We have a historic opportunity in Brooklyn to create a national model of what a truly progressive prosecutor’s office can be. I plan to achieve that goal by consulting a committee of experts and creating a set of guidelines that will focus on those who do the most harm, while reducing incarceration and finding new ways to hold accountable those who can safely be diverted or deflected entirely from the criminal justice system.

“We will use data to support and guide innovation and to reduce racial disparities in our system, work in collaboration with stake holders and community partners to foster safe and healthy communities, and enhance our transparency and accountability. This vision will govern the direction of my Office and I will task my staff with making measurable progress towards achieving the committee’s recommendations by 2020.”

Dr. Crew said, “I believe the Task Force is well positioned to develop the kind of transformational ideas that emerge when we look at issues in a more holistic and integrated way.  The Launch Committee is composed of a diverse set of institutions that are all too often isolated in their own echo chambers. Until we understand the web of mutuality that exists between the courts, schools, police and our communities, we will continue to falter when it comes to justice.  Brooklyn DA Eric Gonzalez is defining and leading a new approach to the complexity of achieving greater equity in the criminal justice system.”

The District Attorney said that Brooklyn is uniquely positioned to take on this endeavor as a true partnership with community organizations and leaders – and serve as a blueprint for reform that can be emulated across the country. The borough is safer than it’s ever been as 2017 ended with the lowest number of homicides and shootings since record-keeping began. The late DA Ken Thompson and DA Gonzalez have put in place notable reform-minded programs, such as a bail policy that decreased reliance on cash bail, an immigration policy aimed at minimizing collateral consequences of criminal convictions, a Conviction Review Unit that’s considered a national model, and an initiative to vacate hundreds of thousands of outstanding summons warrants that were generated due to failures to pay fines for minor infractions.

Justice 2020 will build on these strong foundations, representing the first time that the people of Brooklyn are asked to actively participate in reforming their criminal justice system. Importantly, any reforms implemented as part of the initiative will not compromise public safety, which remains the DA’s highest priority.

The Launch Committee, which has over 60 members, is divided into sub-committees that focus on different facets of the justice system in Brooklyn, including: alternatives to prosecution and restorative justice; mental health; case handling reforms; violence prevention and gun strategies; civil rights and policing; data and transparency; professional responsibility and conviction integrity; among others. The Committee’s purpose is to provide fresh, outside perspectives and ideas to help the DA advance his vision and reform agenda. Each member brings significant expertise and experience to the task; many are nationally recognized experts in their fields.

The Director of the Launch Committee is Jill Harris, Special Advisor to the District Attorney. She recently joined the Brooklyn DA’s Office after serving as the Deputy Director of the ACLU’s Campaign for Smart Justice. She previously worked as the Managing Director of Policy and Strategic Initiatives at the Drug Policy Alliance and as a trial attorney at the Legal Aid Society.